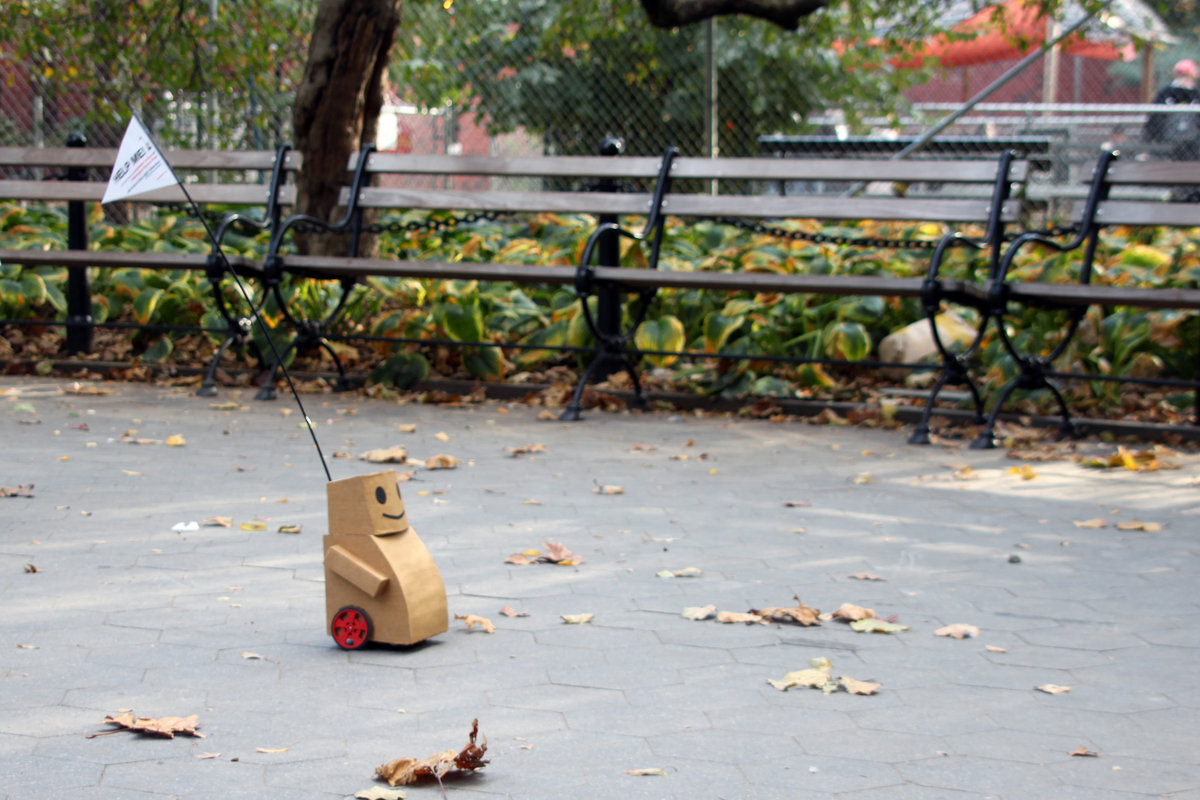 Several years ago, I began to make human-dependent cardboard robots and place them on the streets of New York City. These little robots, which came to be known as Tweenbots (a combination of the words “between” and “robot”), roll at a constant speed, in a straight line, and have a flag that says that they are trying to get to a certain destination (e.g., the southwest corner of Washington Square Park). The flag asks for people to aim the Tweenbot in the right direction to reach its goal.

New York City is a large and bustling place – and if one ascribes to the stereotypes about New Yorkers’ helpfulness, the outlook did not appear promising for these little cardboard robots.

On the other hand, the Tweenbots are irresistibly cute. They have a cheerful posture and move along at a bumbling pace. As you look down at them, the first thing you see is an iconic smiley face made of two large circles for eyes and a line for a mouth.

Scott McCloud, who writes about the theory of cartoons in his book Understanding Comics, explains the deeply embedded mental processes that compel us to interpret everything in our own image; we can’t help but transform two dots and a line into a face. For McCloud, the less realistic –the more abstract and iconic– a character’s features, the more easily we fill in the details based on our own perspective and imagination, “assigning identities and emotions where none exist.” We project ourselves onto characters so that we not only identify with them, we inhabit and become them.

Over the course of a few months, as I observed people interacting with the Tweenbots, I came to realize just how powerful their anthropomorphic and emotive qualities were. At first, I started to perceive this through people’s use of simple gestures that are commonplace in our everyday social interactions; when a pedestrian looked down at a Tweenbot’s smiling face, they couldn’t resist smiling back. This automatic mimicry is a sort of emotional contagion, and goes beyond unconsciously mirroring another’s expression – it also implies that you can “catch” or feel the emotions of another. I saw this automatic response over and over again, and hoped that by smiling in response to the Tweenbots, people were actually feeling happier. I also came to recognize that people were experiencing deeper emotional connections when, moments after they characterized the Tweenbot as happy and non-threatening, they seemed to consider the Tweenbot’s presence in the context of the big city and respond empathetically to their plight.

Empathy is being able to walk a mile in someone’s shoes, to vicariously experience and understand what another is going through. As I watched some people bend down and gently orient the Tweenbot in the right direction, it occurred to me that the Tweenbots were inviting people to extend beyond themselves to experience the city from the perspective of a tiny and tragically cheerful cardboard robot. With their improbable presence on city streets, Tweenbots are the quintessence of vulnerability, of being lost, and of having intention without the means of achieving their goal alone. We all know –or can imagine– what it feels like to be lost or helpless in the face if the city’s massive network of streets, subways and crowds. But this overwhelming milieu may also be the reason that we ignore others who may need help as we go about our daily routines. The unexpected appearance of the Tweenbot, along with their disarming appearance, disrupted the self-focused navigation of the city, inviting people to stop and interact. New York brought the Tweenbots to life when people projected their own feelings onto the simple forms of the Tweenbots, and in a small way for just an instant, they perhaps saw themselves looking up from the sidewalk as a helpless cardboard form.

It seemed entirely possible that this empathetic connection was what motivated so many people to help the Tweenbots. Every time a Tweenbot got stuck in a pothole or started to grind futilely against a curb, someone would come to its rescue. Strangers, who seconds before would have no reason to talk to one another, came together to help. People talked to the Tweenbots, and asked for directions on the Tweenbot’s behalf when they did not know which direction to aim it. Of all the amazing interactions, my favorite was when one man turned a Tweenbot back in the direction it had just come, saying out loud to it “you can’t go that way, it’s toward the road.”

To learn more about the Tweenbots, you can check out the website here.

Tweenbots from kacie kinzer on Vimeo.

Kacie grew up on a ranch in New Mexico and received her BA in English and Communication from Texas A&M...